“I don’t even know how to put it on paper, the impact that one of the camps I attended 2 years ago had. It changed my young life forever! At the camp you spoke about the mind and how it works, but you then mentioned something more. You said about 98% of us lose our creativity by the time we reach 18 years! That was it. I could relate totally with that statement because when I was young, I used to be extremely creative, creating and building things that I came up with on my own. When you said that, my time at the camp came to an end. I was grieving deeply. I wanted my creativity back and went home and read the SynNovation book to make sure I absorb all the points.”

This was the first paragraph of an email that opened new opportunities for several people – including us at SynNovation. For Youth Month, I would like to share a bit of this story with you.

Since 2013, we have had the privilege every year of working with a unique NPO, StudyTrust – which provides bursaries and well-structured academic and life-skill support to over 1000 students a year. Students come from all over South Africa. Potential and financial need are the main criteria for selection. They have an average success rate of 85% of bursars passing courses like engineering and BSc in the prescribed time.  See www.studytrust.org.za

We share with the students the very useful SynNovation tools for creativity, critical thinking, collaboration, communication, and practical implementation. It was in his first year, in 2013, that Farisani Ramabulana (who wrote the paragraph above) had the re-awakening of his childhood creativity after one of our workshops. He wrote to me in his third year, so let him tell us more.

“I decided on working to improve my thinking by first recognizing that it was a skill that could be developed. (This mental shift began at the camp). I got a book, known as the five elements of effective thinking, that I began devouring!! I applied the thinking techniques to one of the courses that was giving me problems because it demanded my thinking. I had gotten 40% for my first test. Through developing thinking as a skill, I ended up getting 90% overall for the same course. My life has never been the same.” He was inspired to take other initiatives, to help engineering students to grow their creativity, emerged as a student leader, and completed his BSc Chem Eng with 27 distinctions out of a total of 31 subjects, over 4 years. He is now a successful investment analyst.

I thought, if a 4-hour work workshop can make such a difference in a young man’s life – let him get a bigger “dose.” A businesswoman friend who wanted to experience SynNovation planned to attend our 2-day TIPS! workshop (Thinking, Innovation and Problem-solving Skills). I asked her if she would sponsor a fee for a very bright student to attend with her. When I gave him the good news, Farisani said, “I have a friend and mentor that I would like you to meet. I am sure you will like him. Can I bring him along?” So I got to meet Muimeleli Mutangwa, then a Chem Eng Master’s student at WITS. Muimeleli is now a valued director and shareholder of SynNovation. And that is a story on its own… Later Muimeleli and Farisani brought along other student leaders like Mulweni Mathagu – and that is how I now have three “Venda grandsons” of whom I am very proud, and our team has three bright young “SynNers,” who live and spread the SynNovation way of thinking, relating and doing.

I stretched the sponsorship from my friend for these two young men, and also invited two bright young women on the StudyTrust staff, Zandile Zulu and Bonolo Letshufi. And so, the November 2015 TIPS! became a memorable event in the history of SynNovation – bringing in the thoughts, energy and talents of several eager, young “bright sparks.”

Farisani can end our story, as he ended his email. “Whenever I have to tell people about thinking, I always quote what you said that changed my life. We need more organisations like SynNovation. Thank you! I am now known as a ‘thinker’ in my environment!” 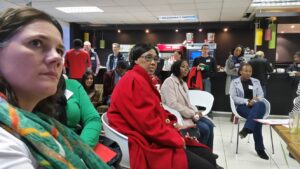 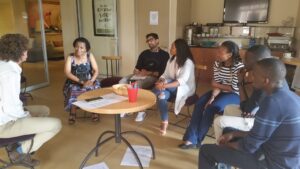 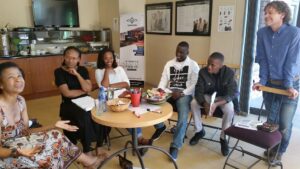 Story-teller Mamphela shares with us.

Together after a magical workshop.